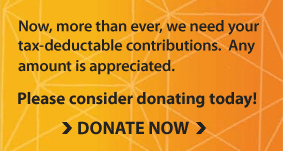 Residents and visitors celebrate at the dedication in April, 2008

The mission of the Tony Smith Sculpture Project (TSSP) is to make the life, work, and impact of artist Tony Smith easily accessible and beneficial to the public.

Through the support of public art projects, such as Smith’s sculpture TAU, the Lennie Pierro Memorial Arts Foundation (LPMAF), which sponsors the project, seeks to enrich the lives not only of residents of Smith’s hometown, South Orange, but of visitors from all communities.

The on-going work of the TSSP and LPMAF (named after the late artist and art educator, Lennie Pierro of South Orange), is supported chiefly by private donations. 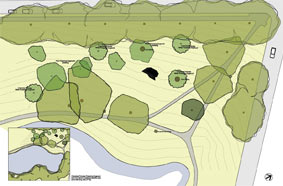 The sculpture is installed, but our work is not done. Your help is still needed.
› Learn More

TAU is black-painted steel and measures 14 ft high x 21 ft wide x 12 ft deep. It weighs roughly six tons. Fabricated in 2005, it was installed in its current setting in South Orange in 2008.

The original model for TAU was created by Smith in 1961-62, and is representative of his bold, geometric work from that time. The sculptor often used small cardboard tetrahedrons (three-dimensional triangles or pyramids) to create the models for his pieces, a technique he began to explore while bedridden during a childhood illness. TAU was probably envisioned in this way, then enlarged and fabricated in steel like the artist’s other monumental sculptures.

Smith designed TAU to have an organic, architectural presence. (In fact, he preferred that his works be called “presences” rather than sculptures.) Its shape, angles, and even color change depending on the time of day and the viewer’s position, so that the piece appears to be responding to the landscape around it.

There is an earlier version of TAU in front of Hunter College in New York City, where Smith once taught. In contrast to that urban setting, this later version of TAU has been sited in leafy Meadowland Park, on the slope between the Duck Pond and North Ridgewood Road. 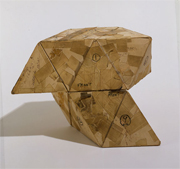 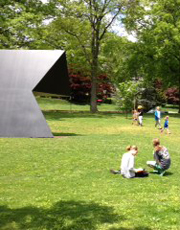